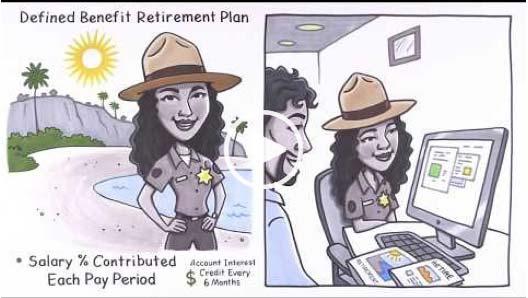 Welcome to OCERS, the Orange County Employees Retirement System. For 75 years, OCERS has been providing retirement, death, disability, and cost-of-living benefits to employees of the County and certain districts. Our services begin the moment a new hire becomes an OCERS member and continue throughout the member’s career and retirement. We are driven by our Mission, Vision and Values:

Mission:  We provide secure retirement and disability benefits with the highest standards of excellence

For over 75 years, the Orange County Employees Retirement System (OCERS) has been providing retirement, death, disability, and cost-of-living benefits to employees of the County and certain districts. During that time, OCERS’ membership has increased from less than 1,000 members in 1945 to more than 29,000 active and deferred members and more than 19,800 payees (retired members and beneficiaries) as of 2021.

OCERS’ origins actually date back to the fall of 1944 when the Orange County Board of Supervisors called for the submission of a proposition to the people of Orange County. This Proposition requested that the County accept the provisions of the County Employees Retirement Act of 1937.

The County Employees Retirement Law of 1937 - better known as the ‘37 Act or CERL – is a body of law enacted to govern retirement benefits for certain public employees. OCERS is one of 20 counties in California subject to the provisions of the ‘37 Act.

The latest edition of the Retirement Law Book includes the following sections:

This proposition was approved by a majority of voters at the November 7, 1944 General Election, and as a result, OCERS was officially established on January 1, 1945.

Upon OCERS’ creation, a Retirement Board consisting of five members (the County Treasurer, two active elected members, and two qualified electors of the County) was established to govern the plan. Today, there are nine Retirement Board members and an alternate.

Relationship to the County

The next step was for OCERS to work toward complete separation from Orange County. The stage was set for this separation in 1992 when the California Pension Protection Act (Proposition 162) was passed. This act established that the Retirement Board has “plenary authority”.  Complete separation was finally declared by a Retirement Board Resolution in February 1995. In addition, the passage of AB1992 on June 27, 2002 made OCERS an independent district.

The benefits offered to OCERS’ members have changed over time as well. Generally, benefits are set by the Board of Supervisors in accordance with the California Government Code.  In 1945, the benefit in effect was a “money purchase plan,” which provided a benefit determined by the member’s age at retirement and the total amount contributed, plus accumulated interest. The benefit changed to a “defined benefit plan” on June 1, 1962, and the benefit payable was determined by the member’s age and one-sixtieth of his or her highest three-year average salary for each year of service. It also allowed a continuance to a spouse under the most valuable option. The benefit increased on July 3, 1973, to one-fiftieth of the member’s highest one-year average salary, then was reduced on September 21, 1979, to one-sixtieth of the member’s highest three-year average salary for those hired on or after that date (called Tier II members.) In June 2002, Assembly Bill 1992 was signed into law giving the County and other public agencies the ability to negotiate different benefit formulas with their employees. Currently, OCERS’ various plan sponsors have adopted a number of different plan formulas. Members with an entry date prior to September 21, 1979 will have their highest one-year average salary used to determine their retirement allowance while members hired after September 21, 1979 will have their highest three-year average salary used to determine their retirement allowance. For a new member hired on or after January 1, 2013 who was not a member of a public retirement system prior to that date, could not establish reciprocity from public employment prior to January 1, 2013 or had a break in active OCERS’ membership of more than six months and returned to a different employer covered by OCERS are subject to a reduced retirement benefit formula, reduced compensation rules and new retirement eligibility criteria as determined by Assembly Bill 340 (signed into law in September 2012).

In 1945 member contributions were determined by the member’s age when they joined the Retirement System. Different rates were set by the actuary based on age and sex. Female members paid slightly higher rates; however women’s slightly higher age factors resulted in slightly higher benefits. Effective December 30, 1976, rates were standardized to equal rates for men and women. Contribution rates for Tier I, Tier II, General and Safety Members differ and are set by the Board of Retirement based upon provisions of the 1937 Act and actuarial data.  For members hired on or after January 1, 2013, employers and employees must equally share normal cost and employees must pay at least 50% unless it is collectively bargained for the employee to pay more.

Throughout all these changes over the years, OCERS has remained committed to fulfilling its fiduciary responsibility to the assets and administration of the System in a manner that assures prompt delivery of benefits and related services to the participants and their beneficiaries.